Kaing Guek Eav, also known as Comrade Duch, had his conviction upheld and his sentence increased by the Supreme Court Chamber of the Extraordinary Chambers in the Courts of Cambodia (ECCC) earlier this week.  The ECCC was established as a mixed Cambodian-international tribunal to try those responsible for the Cambodian genocide of 1975-79.  In less than four years, the Khmer Rouge regime led by Pol Pot killed approximately 1.7 million Cambodians, or roughly a quarter of Cambodia's population.  Duch was head of a prison--S21--in Phnom Penh called Tuol Sleng.  Nearly all of the approximately 15,000 people who passed through Tuol Sleng were killed. 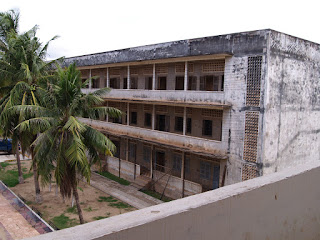 Duch was convicted of crimes against humanity and grave breaches of the Geneva Conventions in July 2010 in the first trial conducted in the ECCC.  He appealed the verdict in March 2011, claiming that, as a junior official in the Khmer Rouge, he was merely following orders on pain of death.  His argument was rejected by the court, which increased his sentence from 35 years to life in prison.  Judge Kong Srim called Duch's crimes "among the worst in recorded history."
Labels: genocide, human rights, Southeast Asia, war crimes
Newer Post Older Post Home