Race to the North

It is a pleasure to note the recent publication of "Race to the North: China's Arctic Strategy and Its Implications" in the Spring 2013 issue of the Naval War College Review. Shiloh Rainwater, a senior Political Science major at Pepperdine, is the author of this important paper analyzing Chinese interests in the Arctic and China's desire to join the Arctic Council. 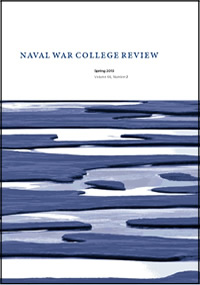 The cover art for the issue is linked to Rainwater's article, with this description:

Open water in the Arctic ice cap, in a U.S. Coast Guard image posted on the website of the U.S. Geological Survey. This 2009 image, which the photographer titles Reflections, was taken in August, but open water is appearing in ever-greater expanses of the region and for ever-larger proportions of the year—a fact that has drawn the attention of nations far from the pole. In this issue, Shiloh Rainwater explores the Arctic interests of one important non-Arctic nation, the People’s Republic of China.

I am delighted to have served as the thesis advisor for Rainwater on this paper. Congratulations, Shiloh.
Labels: China, environment, maritime law, oil

If you're not worried about cyberattacks--and about the security of the many institutions that now rely on the Internet--you're not paying attention.

American Express went offline for two hours yesterday as a result of a cyberattack that experts believe provides evidence that some government-sponsored hackers--current suspicions point toward Iran and North Korea in recent attacks--are interested not in espionage but in destruction. Speaking of similar attacks on South Korean banks last week, the research director of one computer security firm said, "This attack is as much a cyber-rampage as it is a cyberattack." While American Express confirmed that it had come under attack on Thursday, it also said it believed no customer data had been compromised.

Convictions at the ICTY

Yesterday the International Criminal Tribunal for the Former Yugoslavia (ICTY) handed down sentences in the cases of two former Bosnian Serb officials convicted of crimes against humanity and war crimes. Mićo Stanišić and Stojan Župljanin were both sentenced to 22 years in prison having been convicted of the following charges: "persecution, a crime against humanity, through the underlying acts of killings; torture, cruel treatment, and inhumane acts; unlawful detention; establishment and perpetuation of inhumane living conditions; forcible transfer and deportation; plunder of property; wanton destruction of towns and villages, including destruction or wilful damage done to institutions dedicated to religion and other cultural buildings; and the imposition and maintenance of restrictive and discriminatory measures."

Both men were also convicted of murder and torture, which are classified as war crimes. Župljanin, but not Stanišić, was convicted of extermination as an element in the crimes against humanity.

The charges stemmed from the defendants' efforts to establish an ethnically pure Bosnian Serb state (Republika Srpska) following the breakup of Yugoslavia. The resulting conflict in Bosnia, which lasted from March 1992 to December 1995, claimed approximately 150,000 lives. During the war, scenes reminiscent of those in Nazi concentration camps were played out in various locations across Bosnia as a genocidal policy of "ethnic cleansing" was implemented by the Bosnian Serbs and, on occasion, other parties to the conflict.

To date, the ICTY has indicted 161 people and has discharged cases involving 136. Sixty-nine people have been convicted of crimes; 18 have been acquitted; 13 have been transferred to other courts for trial; 36 cases have been terminated without a verdict (as, for example, in the case against former Serb president Slobodan Milosevic, who died before the conclusion of his trial) or have had charges withdrawn; and 25 cases are ongoing.
Labels: human rights, torture, war crimes

The designation of a Dutch web hosting company, Cyberbunker, as a spammer by an informal Internet organization called Spamhaus has touched off a private cyberwar with public consequences thanks to what many regard as a basic flaw in the architecture of the Internet.

Beginning on March 19, a distributed denial of service attack (DDoS) began in an effort to shut down Spamhaus and CloudFlare, the Internet security company in Silicon Valley employed by Spamhaus to try to defeat the attack. The attack, however, has affected not only its primary targets but many innocent bystanders as well. One observer compared what was happening to firing a machine gun into a crowd of people surrounding the actual target.

What makes this particular attack noteworthy is that it is the largest DDoS attack ever publicly announced, having achieved rates of data traffic to the targets ranging from 75 to 300 Gbps (gigabits per second). The attack has reportedly slowed Internet traffic all over the world. This has been achieved using an amplification effect made possible by open DNS servers. DNS (or Domain Name System) servers are open computer servers that provide the essential function of translating domain names (e.g., www.robertewilliamsjr.com) into the number string that makes it possible for messages (including requests to see what's available on a web site) to be routed to the right servers. As a consequence of spoofing, or pretending to be from a different computer, the DDoS attack launched against Spamhaus and CloudFlare used an estimated 30,000 of the DNS servers (out of 25,000,000 worldwide) to send messages back to the servers hosting Spamhaus and CloudFlare. (For more on the technical aspects of the attack, see this story in Tech Week Europe.)

The Internet's present architecture requires the existence of publicly accessible DNS servers to route information properly. It also provides few ways to protect these servers against malicious attacks such as the one targeting Spamhaus and CloudFlare. "Ingress filtering"--analyzing incoming traffic to detect spoofing so that requests associated with DDoS attacks can be rejected--is a possibility, but because it involves financial costs to the private companies that maintain the DNS servers, few have responded to the need.

Internet access has become a public good that is largely under private control with consequences that some experts believe could be catastrophic. The current cyberwar provides a glimpse of what is to come under the current arrangements.
Labels: cyber security, information

There's a good argument to be made that human rights groups played an important role in bringing about an end to the Communist Party's monopoly on power in Russia. (Aryeh Neier makes the argument in his 2012 book, The International Human Rights Movement: A History.) Unfortunately, Russia's current government is showing no gratitude.

Officials from the tax authorities and the general prosecutor's office raided Amnesty International's office in Moscow today. A crew from the government-owned NTV television network arrived at about the same time and, according to a New York Times report, has been trying to gain entrance. The network, according to the Times, "is known for producing salacious reports about critics of the Russian government."

The Moscow office of Memorial, a Russian human rights organization, was raided last week. Memorial was also targeted by a police raid in St. Petersburg in 2008 that resulted in the removal of twelve computer hard drives containing the organization's digital archives.
Labels: human rights

China in the World

Brother Number 3, Ieng Sary, has died in Phnom Penh at age 87 while standing trial for genocide, crimes against humanity, and war crimes committed as part of the Cambodian genocide from 1975 to 1979. His case in the mixed UN-Cambodian tribunal called the Extraordinary Chambers in the Courts of Cambodia (ECCC), designated Case 002, will continue with his co-defendants, Nuon Chea and Khieu Samphan. Ieng's wife, Ieng Thirith, was also a co-defendant in the case before her dismissal due to advancing dementia.

Ieng was a co-founder of the Khmer Rouge along with his brother-in-law (and Brother Number 1), Pol Pot. He served as foreign minister during the Communists' genocidal rule in Cambodia, a period in which approximately 1.7 million people died from executions, starvation, and forced labor as the Khmer Rouge attempted to return Cambodia to "Year Zero." Ieng persuaded many educated Cambodians who had left the country to return to help rebuild it; most were subsequently imprisoned, tortured, and killed.

Ieng's death before the conclusion of his trial has highlighted one of the most significant problems with the ECCC. The long delay in its creation coupled with its very slow pace of operation has severely limited its ability to prosecute those who were most responsible for the destruction of Cambodia in the 1970s. Pol Pot died of natural causes in 1998, well before the tribunal began its operations in 2006.

To date, the ECCC has spent $175.3 million and has completed one trial, that of Kaing Guek Eav ("Comrade Duch"), who was in charge of the notorious Tuol Sleng prison in Phnom Penh. Two other cases--Case 003 against Meas Mut and Sou Met and Case 004 against Im Chaem (a Buddhist monk now)--are ready for trial but are mired in political controversy. The government of Hun Sen, who has ruled Cambodia as prime minister since 1985, has numerous links to the Khmer Rouge terror that it prefers not to have revisited through trial testimony. Hun Sen has said that he will block future indictments.
Labels: genocide, human rights, obituaries, Southeast Asia, war crimes

On Monday, Joseph Torsella, the U.S. ambassador for management and reform at the United Nations, told his colleagues in the Fifth Committee (the budget committee) that negotiations might be aided by an increase in sobriety among the delegates. Here are his exact words:

As for the conduct of negotiations, we make the modest proposal that the negotiation rooms should in future be an inebriation-free zone. While my government is truly grateful for the strategic opportunities presented by some recent practices, let's save the champagne for toasting the successful end of the session, and do some credit to the Fifth Committee's reputation in the process.

This is not something one hears often from diplomats.

There is probably no organization that has done more to disentangle American Protestantism from its unholy alliance with the Republican Party than the Sojourners Community founded in the 1970s by Jim Wallis. Social justice has been the touchstone of the organization and its widely read publications including Sojourners magazine and the God's Politics blog.

Today the blog features a story by Pepperdine alumna Deborah Whang. "Justice Starts with Empowering Women in the Developing World" addresses issues that Deborah has been passionate about at least since her days as an undergraduate. It's an interesting and compelling piece--and well worth reading, especially with International Women's Day coming up later this week.
Labels: development, women
Newer Posts Older Posts Home
Subscribe to: Posts (Atom)