Cambodia, considered by some Americans at the time to be a sideshow of the Vietnam War, experienced almost uninterrupted warfare for over three decades beginning in the late 1960s. As a consequence, Cambodia today has one of the highest concentrations of explosive remnants of war (ERW)--land mines and unexploded ordnance (UXO)--of any country in the world.

In spite of the Cambodian government's desire to hide the problem in order to avoid negatively affecting tourism, the consequences of the ERW problem are visible everywhere. At roughly 1 in 250, Cambodia is believed to have more amputees per capita than any country in the world. According to the 2006 Landmine Monitor Report published by the International Campaign to Ban Landmines, in 2005 there were 875 casualties (resulting in 168 deaths and 173 amputations) from landmines and UXO in Cambodia. Among those killed were 22 people involved in demining operations. 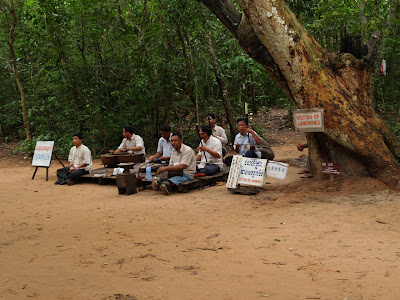 In spite of persistent efforts by a variety of NGOs, there are believed to be 4 to 6 million landmines and other explosive remnants of war still to be cleared in Cambodia, most in areas near the Thai border. Tourists are safe in Cambodia, but many impoverished Cambodians, who must farm what little land they have available to them or starve, are not.