Town and Country in Vietnam

Most of my brief stay in Vietnam was spent in Hanoi and Ho Chi Minh City (formerly Saigon), although one day included a trip by car about 90 kilometers beyond Ho Chi Minh City. In both cities, I was impressed by the level of development and the amount of foreign investment.

Gross domestic product continues to grow at an impressive rate (8.6 percent in 2006), fed in part by Vietnam's membership in the ASEAN Free Trade Area and, since January 2007, the World Trade Organization. While Asian trading partners including Singapore, South Korea, China, Japan, Malaysia, and Taiwan provide most of the the direct foreign investment, American businesses are moving in as well. Some of the high-rise hotels that have sprouted up in Hanoi and Ho Chi Minh City bear familiar names. Today the term "Hanoi Hilton" can refer either to the Hoa Lo Prison Museum or to an actual Hilton hotel located near the Opera House. And KFC, complete with the smiling figure of Colonel Sanders (who, as Adrian Cronauer--played by Robin Williams--noted in Good Morning, Vietnam, looks a lot like Ho Chi Minh), now has several locations in both Ho Chi Minh City and Hanoi. Even more exciting to at least one American I know who lives in Vietnam is the recent arrival of Pizza Hut. 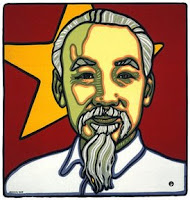 As with most other countries that have experienced rapid economic development, costs and benefits are not being evenly distributed. The traditional mainstay of the Vietnamese economy, the agricultural sector, is rapidly declining in importance. Farmers are being squeezed economically; in fact, signs of Vietnam's modernization largely disappear once one leaves the cities behind. To make the situation even worse for those in the agricultural sector, corrupt officials in provincial governments have reportedly conspired with developers to force farmers to sell land at a fraction of its value.

Over the course of the past month, peaceful protests by farmers upset by land seizures and government corruption in the provinces have been taking place in Hanoi and Ho Chi Minh City. Last Wednesday, police in Ho Chi Minh City reportedly moved in to break up the protest involving 800 to 1,000 people there. Human Rights Watch weighed in with a statement on Friday.