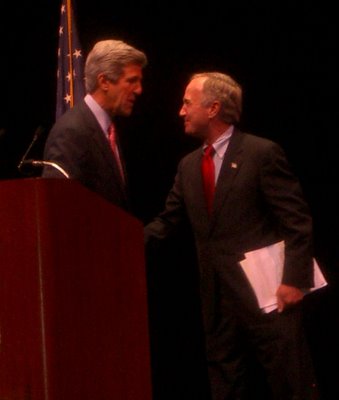 Senator John Kerry gave a major address on the intersection of faith and politics at Pepperdine University on Monday. As Washington Post writer Alan Cooperman noted, the 2004 Democratic presidential nominee "described his religious life in greater candor and detail than ever before."

Especially poignant was Senator Kerry's description of the impact that his service in Vietnam had on his faith.

For me, war was a difficult place for faith to grow. Some of my closest friends were killed. I saw things that disturb me to this day. Theologians often talk about "the problem of evil," the difficulty of explaining why terrible and senseless events are part of God's plan. In combat, you confront the problem of evil in an up-front and personal way that is hard for others to fully understand.

Senator Kerry urged people of faith to find common ground in efforts to address poverty, care for Creation, reduce the need for abortions, and apply religious insights to the problem of war. He especially urged renewed attention to the principles articulated in the Christian just war tradition.

It's in America's interest to maintain our unquestionable moral authority--and we risk losing it when leaders make excuses for the abuses at Abu Ghraib and Guantanamo or when an Administration lobbies for torture.

For me, the just war criteria with respect to Iraq are very clear:

sometimes a President has to use force to fight an enemy bent on using weapons of mass destruction to slaughter innocents. But no President should ever go to war because they want to--you go to war only because you have to.

The words "last resort" have to mean something.

And for all the anger and fear so often expressed about the intersection of politics and religion, I believe that a vision of public service based upon serving rather than being served is ultimately a vision of hope and not despair. The Scripture says, again and again, "be not afraid." God is not through with humanity. Shame on us if we use our faith to divide and alienate people from one another or if we draft God into partisan service.

Shame on us if we sow fear for our own advantage. As God gives us the ability to see, let us take up the tasks associated with loving our neighbors as ourselves. We can take up God's work as our own. The call of Jesus, and of every great religious leader, to everyone is one of service to all and not the pursuit of power. Each of us needs to do our best to answer that call, and help each other hear it in a common spirit of obedience, humility and love.

For the complete text of the speech, go here.

Oh, and for the record, the overflow crowd in Smothers Theater gave Senator Kerry a standing ovation.