Return of the Scream 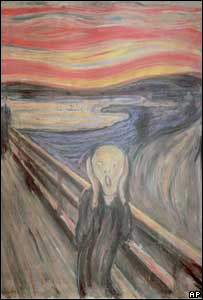 Two years after it was stolen from the Munch Museum in Oslo, Edvard Munch's The Scream was recovered earlier this week by Norwegian police. Contrary to the expectations of many experts, the thieves, three of whom were arrested, were not college students looking for art for their dorm room walls.

In August 2004, thieves stole The Scream and another Munch masterpiece, Madonna, during a daytime robbery at the museum. Like many famous artworks that have been stolen, the paintings were too recognizable to be sold. (In Illicit: How Smugglers, Traffickers, and Copycats are Hijacking the Global Economy, Moisés Naím, citing a New York Times article, states that 43 works by Van Gogh, 174 by Rembrandt, 209 by Renoir, and 551 by Picasso are currently missing.)

Stolen art may not be as fungible as drugs or weapons, but it is nonetheless a significant part of the world's vast underground economy. When stolen art is sold, the buyers are often drug traffickers or arms dealers who have vast sums of money to spend and no scruples about trading with other traffickers.

It's enough to make you want to . . . visit an art museum while the most famous works are still on display. Or maybe just scream.